Derived from a range of outstanding choral music, my themed Playlists are designed to be like concerts, of about an hour in length. This week’s Playlist, “Out of This World,” contemplates outer space and the great beyond through music of the spheres and the heavenly realm. If music be the food of love, play on.

And God Said: Let There Be Lights in the Firmament of Heaven
In Brightest Splendor Rises Now the Sun
The Heavens are Telling the Glory of God

We, who mystically represent the Cherubim,
And chant the thrice-holy hymn to the life-giving Trinity,
Let us set aside the cares of life
That we may receive the King of all,
Who comes invisibly escorted by the divine hosts. Alleluia.
Orthodox Liturgy

Other Worlds Revealed (for wordless chorus Meredith Monk (b. 1942)

Contemplation of the Earth Seen from Space Alec Roth (b. 1948) 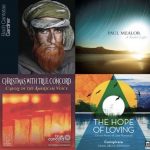