This week’s Playlist explores the beauty and tenderness of blossoms and meadows with works by Britten, Paulus, Whitacre, Corigliano’s setting of Dylan Thomas’s Fern Hill and more.

Lay a garland on her hearse
of dismal yew.
Maidens, willow branches wear,
say she died true.
Her love was false, but she was firm
Upon her buried body lie
lightly, thou gentle earth.
Francis Beaumont (1584-1616)

I Hide Myself
With a Lily in Your Hand
Go, Lovely Rose

Lo, How a Rose E’er Blooming

Lo, how a rose e’er blooming,
From tender stem hath sprung.
Of Jesse’s lineage coming,
As men of old have sung;
It came, a flow’ret bright,
Amid the cold of winter,
When half spent was the night.
15th century carol; tr. Theodore Baker (1851-1934) 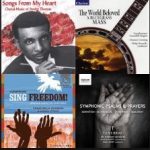 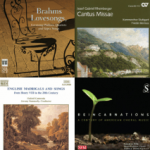