The music of this week’s Playlist utilizes imagery of water and the heart as sources of life, with music of Barber, Howells, Whitacre, excerpts from Haydn’s The Creation, and an arrangement of Carly Simon’s award-winning Let the River Run.

“The Third Day” from The Creation

I saw water flowing from the temple,
on the right side, alleluia:
And all to whom that water came
have been saved, and they will say, alleluia.

Worship the Lord, for he is good:
for his mercy is forever.

Glory to the Father, and to the Son, and to the Holy Spirit.
As it was in the beginning, is now, and ever shall be,
world without end. Amen.
Rite of Asperges, Psalm 118:1 & Doxology

As a hart longs for the flowing streams,
so longs my soul for thee, O God.
Psalm 42:1

Like as the hart desireth the waterbrooks:
so longeth my soul after thee, O God.
My soul is athirst for God, yea, even for the living God:
when shall I come to appear before the presence of God?
My tears have been my meat day and night:
while they daily say unto me, Where is now thy God?
Psalm 42:1-3

Wade in the Water

See that host all dressed in white.
The leader looks like an Israelite.

See that band all dressed in red.
Well it looked like the band that Moses led.
African-American Spiritual

Performed by The Crossing, conducted by Donald Nally

To Be Sung on the Water

Beautiful, my delight,
Pass, as we pass the wave.
Pass, as the mottled night
Leaves what it cannot save,
Scattering dark and bright.

i carry your heart

Infant of the bubbling spring
well in my heart.

Child of the sighing marsh
breathe in my head.

Son of the keen light
quicken my eyes.

Rebel of the restless creeks
tumble in my ears.

Disciple of the rising tide
dance in my heart.

Teacher of the gruff salt-wind
educate my tongue.
Kevin Crossley-Holland (b.1941)

We’re coming to the edge,
Running on the water,
Coming through the fog,
Your sons and daughters.

Let the river run,
Let all the dreamers
Wake the nation.
Come, the New Jerusalem.

Silver cities rise,
The morning lights
The streets that meet them,
And sirens call them on
With a song. 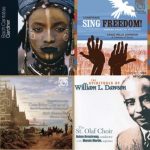 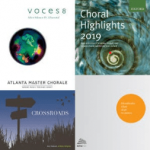