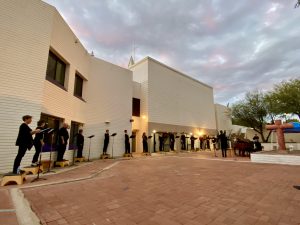 True Concord performs the Brahms Requiem at Dove of Peace

Like performing arts organizations across the nation, we had to reconsider our 2020-21 season due to COVID-19; however, rather than cancelling or postponing our season, we moved full steam ahead with a unique, reimagined fall season. Taking our cue from the National Basketball Association’s 2020 “NBA Bubble” season, we were one of the first performing arts organizations in the nation to recreate the 2020 half of our season around an ambitious “bubble” concept, centered around quarantining of artists and strict safety precautions, designed in consultation with board member and physician, Dr. Eve Shapiro.

In early October, 18 singers arrived in Tucson and began a five-week residency. For the first 10 days, as recommended by the World Health Organization, they individually quarantined and tested multiple times to ensure they were virus-free. Twenty instrumentalists, who also followed quarantining and testing protocols, participated in various parts of the residency as well. The musicians then launched multiple weeks of rehearsals, four recorded performances and 22 live, outdoor performances to limited audiences. Live concert attendance was capped at 50, and numerous guidelines — including requiring masks for patrons, socially distanced seating and timed arrivals — kept audiences safe.

During the “bubble,” project, artists rehearsed, performed, and recorded a total of six unique concert programs which were offered to patrons in the form of live, outdoor performances and online video concerts recorded in high-quality, multi-camera productions by the award-winning crew of Arizona PBS. 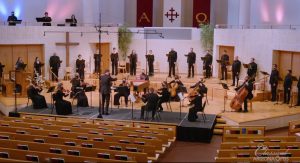 Audiences were effusive in their praise for the project. “I felt so blessed to be in the presence of music, and yet still conscious of what has been lost, in so many ways,” said True Concord patron Gail Eifrig after attending a live Brahms Requiem performance. 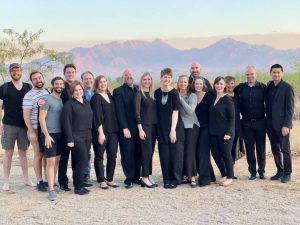 True Concord artists after a concert

Patrons Lucy and John Peck enjoyed watching the online video version of the Requiem. “Although it is different from attending a live performance, we all felt the beauty of the music and text was evident and the quality of the filming was very good,” they said. “True Concord’s effort to provide music for all of us and engagements for your performers is admirable.”

Participating artists also expressed appreciation for True Concord’s “bubble” project. “I cannot overstate my gratitude for the efforts of this organization to create not only meaningful and memorable musical experiences for artists and audiences, but also employment opportunities,” said soprano Chelsea Helm. “True Concord showed their true colors in this fall season ‘bubble,’ highlighting an extraordinary commitment to their community and to their artists, and their determination to shine a light through this dark time.”

Our fall “bubble” garnered national attention in a National Endowment for the Arts report and a Chorus America article.

Currently, we are in the midst of planning our spring season, which will revolve around a similar “bubble” concept, including programs such as “The Trailblazers” celebrating the centenary of U.S. women’s suffrage, “Music for the Royal She,” a concert of pieces written for royal women and “The Goddess – Carmina Burana.” 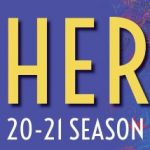