This week’s Playlist is dedicated to the memory of the more than two million lives lost in the Coronavirus pandemic, including more than 500,000 Americans. The program features excerpts from some of the best-loved Requiems, including those by Mozart, Brahms, Fauré, Duruflé and Howells. Also on the program is Stephen Paulus’s ethereal Music, When Soft Voices Die from his Grammy-winning Prayers and Remembrances, and more.

Offertoire (from Requiem in D Minor)

Lord Jesus Christ, King of glory,
liberate the souls of all the faithful departed
from the pains of hell and from the deep pit;
deliver them from the lion’s mouth;
let not hell swallow them up,
let them not fall into darkness.

Sacrifices and prayers of praise,
O Lord, we offer to thee.
Receive them, Lord, on behalf of those souls
we commemorate this day.
Grant them, O Lord,
to pass from death unto life,
which once thou promised to Abraham
and to his seed. Amen.
Requiem Liturgy

Performed by Chamber Choir Trinitatis Kantori, conducted by Per Enevold

Music, When Soft Voices Die (from Prayers and Remembrances)

They Are at Rest

They are at rest.
We may not stir the heav’n of their repose
By rude invoking voice, or prayer addrest
In waywardness to those
Who in the mountain grots of Eden lie,
And hear the fourfold river as it murmurs by.

And soothing sounds
Blending with the neighb’ring waters as they glide;
Posted along the haunted garden’s bounds,
Angelic forms abide,
Echoing, as words of watch, o’er lawn and grove
The verses of that hymn which Seraphs chant above.
John Henry Newman (1801-1890)

Blessed are the dead which die in the Lord from henceforth:
Yea, saith the Spirit, that they may rest from their labours;
and their works do follow them.
Revelation 14:13

In paradisum (from Requiem)

May the angels lead you into paradise;
May the martyrs welcome you upon your arrival,
and lead you into the holy city of Jerusalem.

May a choir of angels welcome you,
and, with poor Lazarus of old,
may you have eternal rest.
Requiem Liturgy 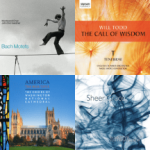 Through the Valley in Peace — February 19, 2021Playlists 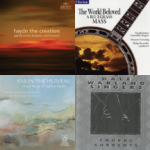