The Hagen/Takach Composers Residency is made possible in part by a gift from Barbara and John McLean.

“Jocelyn and Tim have longtime associations with True Concord and I am thrilled that both have agreed to join our organization in these important roles. It is rare to have a couple both reaching a level of prominence in the composing world. One thinks of Gustav and Alma Mahler, Dory and André Previn, Clara and Robert Schumann, Samuel Barber and Gian-Carlo Menotti, Johana and Roy Harris, Johana Harris and Jake Heggie, but in none of those prestigious cases have both parties been engaged by the same ensemble in these roles, nor are the couples equally adept in the worlds of classical and popular music. We feel fortunate and unique in those respects.”

These important appointments have even more resonance for True Concord as it approaches its 20th anniversary season in 23-24 but first, each composer will have major premieres in the 22-23 season – Takach’s HELIOS in September/October and Hagen’s HERE I AM in January. They are both actively involved in the creation of engagement activities for these debut performances including but not limited to separate performances as their performing duo, Nation. Hagen and Takach noted, “We are honored by True Concord’s invitation to join them in fulfilling their mission in Arizona and look forward to doing our best in enhancing that mission through our work, our ideas and concepts, our joint knowledge of the composing world and composers, and in particular our friend Eric’s desire to expand the reach of music through as many avenues as possible including projections and spoken word.”

The initial two-year agreement involves performances, consultations, vibrant engagement with Tucson’s musical community as well as the community as a whole, and an ever-deepening relationship with the True Concord family. Both Takach and Hagen, based in Minnesota and parents of two boys, are conversant in the American choral experience and will bring their knowledge to bear in Southwest Arizona. They will serve as adjudicators for True Concord’s annual Stephen Paulus Emerging Composers Competition and look forward to encouraging young composers in this regard. They are particularly excited to assist in the planning for True Concord’s milestone 20th anniversary season, 2023-2024. 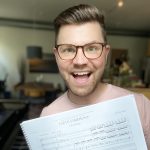 Congrats to our Artistic Partners on EMMY NominationsNews, Uncategorized 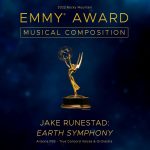 Congratulating Jake Runestad on his Emmy win!Featured on Home Page, News, Our Blog