Soprano Erika Burkhart has been praised for having a voice that is “simply sublime,” with “a breadth of colors…from bright and mischievous to somber and resonant.” (Arizona Daily Star) Ms. Burkhart is an in-demand soloist that has sung masterworks including J.S. Bach’s Magnificat, Mozart’s Mass in C minor, Mozart’s Requiem, and Fauré’s Requiem, as well as works by Monteverdi, J.C. Bach, Buxtehude, and Schütz. Last season, Ms. Burkhart performed  J.S. Bach’s Cantata BWV 132 under the baton of John Harbison. She is a regular soloist and ensemble member with True Concord Voices & Orchestra and sang on their Grammy-nominated recording, Far in the Heavens. For the past two seasons, Erika was invited to sing with CORO Vocal Artists at the Des Moines Choral Festival.

On the operatic stage, she has performed Zerlina in Don Giovanni, Despina in Cosi fan tutte, and most recently, Helen Archdale in the American premiere of Elena Langer’s Rhondda Rips It Up! She also performed for two seasons as a Teaching Artist with Arizona Opera. Erika is a previous winner of the Metropolitan Opera National Council Auditions Arizona District, and has won first place in the Marguerite Ough Competition and the University of Arizona President’s Concerto Competition.

Erika has studied Art Song performance at the American Institute of Musical Studies in Austria, and was invited to SongFest in Los Angeles, California as a Brown Loranger Fellow. Erika is pursuing a Master of Music degree at the University of Arizona and holds a Bachelor of Music degree from the same institution. 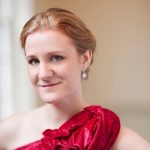