A passionate supporter of Anglican liturgical music, Margaret has been a sought-after cantor for events such as bishop consecrations, priest ordinations, and Holy Week services in major cathedrals and churches in the US (St. John the Divine, New York, NY, Trinity Church in the City of Boston, MA, and Cathedral of St. Philip, Atlanta, GA) and abroad (Westminster Abbey, The Collegiate Church of St. Peter), London, England, and Coventry Cathedral (St. Michael’s Cathedral, Coventry, England.). Presently, Margaret is a staff singer with Emmanuel Music at Emmanuel Church, Boston, MA.

Margaret’s versatility as a singer allows her the opportunity to collaborate with other soloists to perform master choral works at a very high level easily transitioning from medieval and baroque music to classical, romantic, and contemporary repertoire. Margaret was a founding member of The Skylark Vocal Ensemble under Matthew Guard. She performs frequently with Seraphic Fire under Patrick Dupré Quigley, Boston Baroque under Martin Pearlman, Voices of Ascension under Dennis Keene, Sacred Music in a Sacred Space under K. Scott Warren, Emmanuel Music under Ryan Turner, and Musica Sacra New York under Kent Tritle.

Sought after for her administrative talents, Margaret was named chorus representative for Handel and Haydn Society in 2009 and most recently nominated to the Board of Directors for Lorelei Ensemble. Prior to work as a full-time singer, Margaret used her extensive fundraising expertise to write grants, solicit funds, and organize donor events for Boston Modern Orchestra Project.

Margaret began vocal studies at the age of 13 but had already been a student of the Royal School of Church Music curriculum from age 7. As a teenager, Margaret participated in community education studies at Eastman School of Music and eventually went on to collegiate coursework there as well. While at Eastman, Margaret studied with Jane Günter-McCoy and Marcia Baldwin. Presently Margaret studies with D’Anna Fortunato and Claudia Waite. www.margaretlias.com 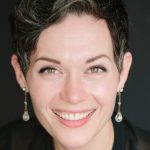