Violist Sarah Toy joined the Tucson Symphony Orchestra in 2015 and is a former member of the Canton Symphony Orchestra.  In addition to her work as an orchestral player, Ms. Toy enjoys an active career as a chamber musician. She has been featured as a musical guest on NPR’s Says You! and has performed with the Cleveland Chamber Music Society. She has collaborated with such artists as Boris Berman and Franklin Cohen, former Principal Clarinetist of the Cleveland Orchestra, and has coached with members of the Brentano, Cleveland, Juilliard, Emerson, and Cavani quartets.

Ms. Toy received her Bachelor of Music and Master of Music degrees from the Cleveland Institute of Music, where she completed her studies under the tutelage of Jeffrey Irvine.  She has also studied under Karen Ritscher. Summer festivals include Spoleto Festival USA, Norfolk Chamber Music Festival, and the Aspen Music Festival and School.

Ms. Toy plays on a viola that was custom-built for her by Gabrielle Kundert in 2015. 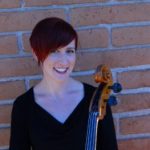